It’s also a mind boggler B/C affordability is one of the biggest problems in this state. Many Californians are struggling to make ends meet. Texting is no longer a luxury-type service that folks can simply cut. Texting is now an integral part of our daily lives. We use texts to communicate with friends, family, and coworkers as well as to notify patients of upcoming doctor appointments, to warn citizens about emergency evacuations, to organize political activities, and so much more. FYI, according to the California Telecommunications Industry Association, consumers exchanged 1.77 trillion text messages in 2017, making texts one of the most common means of communication for Americans.

Sooo, SUP? The California Public Utilities Commission (PUC) already collects a 6.68% surcharge on telecom wireless and landline services. BTW, this surcharge has already more than tripled since 2011. Yet, earlier this month, PUC Commissioner Carla Peterman drafted a proposal to extend that same 6.68% surcharge to the fees that consumers are charged for texting and it was scheduled for a vote in January. Her proposal even contemplated a five-year retroactive application of the surcharge. SRSLY. This tax would have cost customers an additional $1.34 for every $20 of texting fees, hitting lower income Californians the hardest.

Ironically, this surcharge would go to fund a program that primarily subsidizes wireless service for lower income Californians. Yet, a household of two people making a combined income of $28,000 is above the threshold to be considered “low income” for purposes of the PUC’s program and these residents would have to pay the new text tax. SMH. Rather than broadening the tax base, Commissioner Peterman’s proposal would add yet another burden to California wireless consumers already paying its surcharges. CalChamber, along with a group of other business organizations, strongly opposed this proposal.

Fortunately, there is some good news here. ICYMI, the PUC announced on Friday that it is pulling the text tax vote based on recent actions by the FCC. Last week, the FCC issued a new rule finding that text messaging is an “information service” not a “telecommunications service.” Why does this matter? Federal law limits state authority over information services and has never authorized state surcharges on them. So, for now, the PUC is blocked from taxing texts. IMHO, this is great news. 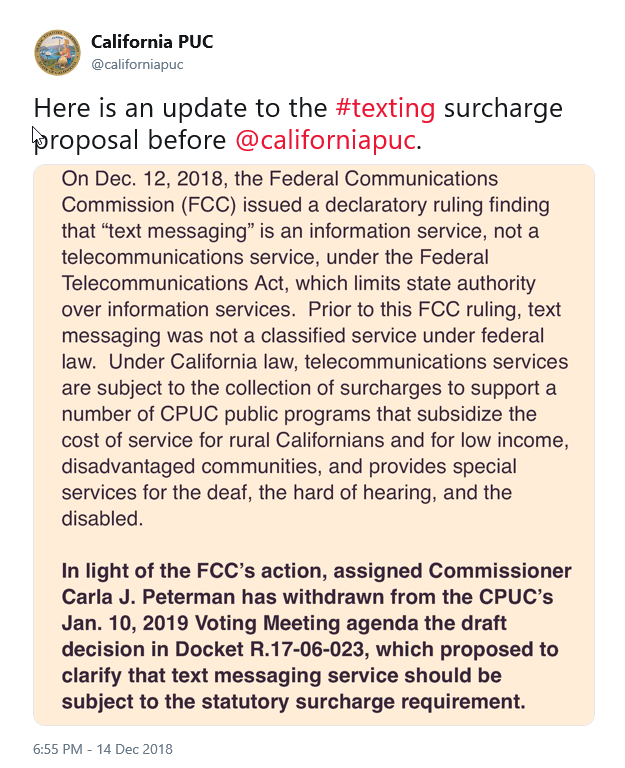 What is the Capitol Insider?